After getting over the initial learning curves of django's forms, I've begun to really appreciate the level of customizability the developers have incorporated into the API.  By default, when sending a model to a form, any DateField members are converted to form DateField instances, which translates to a simple textfield.  This isn't very attractive and quickly leads to formatting complaints from users (and supervisors). There's another widget django provides for picking dates--three comboboxes for month, date, and year--but it's not a very elegant solution.  I thought it would be nice if, by default, all my forms could use jQuery UI's datepicker.  Here's what I did.

First, after some searching online, it seemed several people have experienced similar issues.  I happened to run across this answer on stackoverflow for customizing widgets for all forms.


First, on ProjectForm I specify a custom callback function for handling form fields.  This is actually really nice as I can apply this code to any form I want instead of marking individual fields for a form or applying the entire fix to every single model.

In make_custom_datefield I do a quick check to see if it's a model DateField instance.  If it is, I do some modifying.  First, I change the format of the widget so incoming data from the model match jQuery's format.  It might be possible to modify jQuery to match Django, but whatever.  Then I add on two custom attributes to the widget.  Both of these directly map to html attributes of the input tag.


The datePicker class is important so I can mark this input as a jQuery calendar in the browser.  I also mark it as readonly so users can't modify the date with bad formats.  Marking the input as read-only is a double-edged sword as it also prevents users from quickly entering dates months or years away.

Once that is working, I just need to add some code to my page that will mark all datePicker instances in javascript as being datepicker widgets. 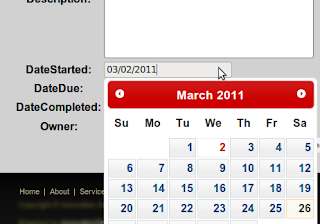 And that's it!  I can now make jQuery UI datepickers the default widget on any django form I choose.
Posted by strattonbrazil at 2:27 PM 14 comments: