In one short word... depends.

I would definitely agree that someone can sit down and bust out a simple ray tracer. When I was learning python, I hacked a 500-line script to render a simple scene. It has shadows, reflective materials, and a couple of primitives that would have to be discretized into triangles to render with a rasterizer. The only real library I used was an image library to actually put the image into a window.

In my opinion, it's some pretty simple code to implement these rather significant features. If I wanted to add more complicated features like shade trees, it would have been a relatively simple addition. Not only was this script straight forward, but I implemented it right off the top of my head. I don't have the best of memory, so I'd like to reinforce these concepts are quite intuitive to remember. 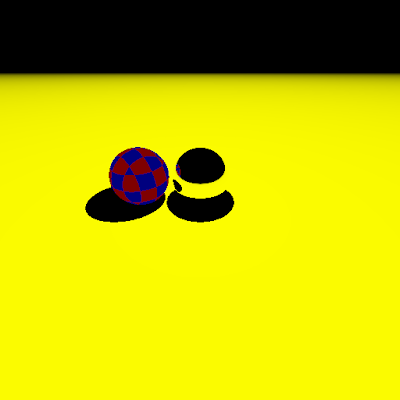 Same work with a rasterizer
Now, let's imagine that I had to write the same kind of functionality in a simple scanline rasterizer.

I certainly can't elegantly fit all that in under 500 lines of code. It's pretty evident that implementing a few basic visual effects is obviously much simpler with ray tracing.

Where is Rasterization Simpler?
Ray tracing models light transport in a very physically-realistic manner. It handles pretty much any "effect" rasterization can do, but it comes at a big cost--mostly performance. Most ray tracing research currently is all about making the algorithm faster, which requires some very complex code to be written.

First, ray tracing pretty much requires the entire the scene including textures to fit into local memory. For example, if you fire a ray into the scene above and it hits the ball, that ball needs to know about the plane below it and the ball to the left of it to do a reflection. That's simple enough in this case, but what happens if your scene is five gigabytes and you have four gigabytes of RAM? You have to go through the incredibly slow process of getting that primitive from the hard drive and load it into memory. That's a ridiculously slow. And the very next ray may require another hard drive swap if it hits something not in memory.

One easy solution is to break your scene up into manageable layers and composite them, but then you have to start keeping track of what layer needs what. Like if you have a lake reflecting the far off mountains, both need to be in the same layer.

Despite the research in this field, it's still expensive to maintain them as the scene changes. State of the Art in Ray Tracing Animated Scenes discusses some of the more recent techniques to speed up this process, but as Dr. Wald says, "There's no silver bullet.". You have to pick which acceleration structure to use in a given situation, and then you have to efficiently implement them.

With a rasterizer, you have to linearly go through your entire list of geometry. But if we're animating and deforming that geometry anyway, that's fine. With a ray tracer, animation means having to rebuild your acceleration structures. Why does ray tracing make animation so complicated when it should be so simple?

Ray Tracing Incoherency
Ray tracing is inherently incoherent in many ways. Firing a ray (or rays) through every pixel makes it difficult to know what object the renderer will want in the cache. For example, if one pixel hits a blade of grass, that geometry needs to be loaded into the cache. If the very next pixel is another piece of geometry, that blade may need to be swapped out again. For visibility rays you can optimize this a little bit, but with secondary rays (the entire purpose of ray tracing) these rays are going all over the place. Many elaborate schemes have been developed to attack this problem, but it's a difficult property that comes with ray tracing and won't be solved any time soon.

A rasterizer is inherently coherent. When you load a gigabyte-sized model into RAM and bring its gigabyte of textures, you render the entire scene, you're working with that one model until you need the next one. When doing a texture lookup, there's a really good chance that chunk of texture is still in your cache since the pixel before probably used an adjacent texture lookup. And when this model is completely rendered, you can throw it away and move onto the next one and let the depth buffer take care of the overlaps. Doesn't the depth buffer rock?

Both are Complex
In general, there's nothing really simple about production-quality ray tracing. It basically trades "graphics hacks" for system optimization hacks. David Luebke said in Siggraph 2008, "Rasterization is fast, but needs cleverness to support complex visual effects. Ray tracing supports complex visual effects, but needs cleverness to be fast". Every scene is bottlenecked by time and trying to get ray tracing working in that time isn't always "simple".

Posted by strattonbrazil at 1:27 PM 2 comments:

With the ongoing marketing of interactive ray tracing, I have continued to evaluate why rasterization will continue to be the dominant rendering method in games for quite some time. Ray tracing is considered by many as the end-all-be-all in computer graphics and some people seem to simply turn their brain off when it comes time to discuss its disadvantages. While conversing with an old colleague on that note, I realized I've never met a rasterization fanatic that insists everything has to be rasterized. Wouldn't it make more since to use them in areas they excelled in? As you read the next part, keep telling yourself rasterization still dominates the movie industry for good reasons and why those same principles apply in games.

Rasterization: King (or Queen) of Anti-Aliasing
It's pretty much undisputed (to sane individuals) that rasterization trumps ray tracing in terms of anti-aliasing. When Pixar's REYES renderer was being developed, one of their primary goals was providing high-quality anti-aliasing. This is one of rasterization's biggest advantages and one of the principal reasons off-line renderers still use rasterization for visibility rays. This has to do with the basic difference between ray tracers and rasterizes. With a ray tracer, one ray is fired per pixel and an intersection is computed for that ray. With anti-aliasing, more rays are fired into the scene per pixel. Thus if you want n samples, you fire n rays and do n intersections. These intersections are in 3D and are relatively expensive to compute. Rasterization, on the other hand, does a lot of work to get a primitive onto the screen. Once it's there, however, it can be sampled efficiently in 2D. So, rasterizers project geometry into 2D, and we'd like to sample in 2D since we're making a 2D image anyways. How convenient.

Once the primitive is on the screen, rasterizers can crank out the samples 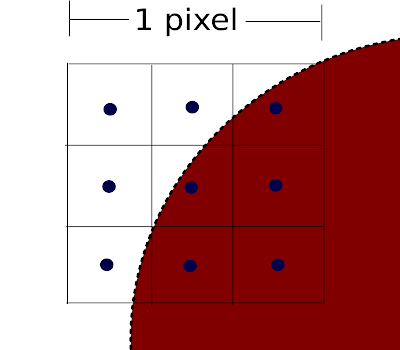 Imagine a pixel on screen as you see above and one desires to perform nine samples instead of one to provide a more alias-free image. With ray tracing, each sample is an expensive intersection test. With rasterization, the renderer simply has to decide, "Does this sample lie inside the primitive or outside?" Hrmm, which one seems simpler? That that may seem trite since a computer is doing all the work, but it's the difference between solving a complex 3D intersection or a 2D region test. With ray tracing, firing n-times more rays is n-times slower. With rasterization, the brunt of the work is getting it on the screen. Once it's projected into 2D, samples are dirt cheap.

Who cares about anti-aliasing?
The topic of anti-aliasing certainly isn't sexy. It doesn't require secondary rays, funky texture maps, or any complex data structure. It's usually just more work. But it's one thing we haven't seen really pushed on GPUs--more settled on. A modern video card can do 16x full screen anti-aliasing and certainly could do much more.

Look at the image below. There's nothing really complicated in this scene. Certainly nothing that would require a ray tracer--mirrored reflections, simple smoke, some large textures, and a lot of little details. For all I know this image could have been ray traced--probably considering every modeler comes with some kind of ray tracer--but it screams for a rasterizer. You'll see games soon turning this stuff out in real time.

Anti-aliasing in games
With production studios sometimes requiring more than 64x samples per pixel, it's no wonder why companies are still rasterizing away. With current graphics cards easily performing 8x sampling per pixel while ray tracers chug away on beastly machines to compete, it would take very little for GPUs to flex their anti-aliasing muscle with even more samples. Anti-aliasing right now is pretty good and it's only getting better. Movie quality anti-aliasing in a game? Woo hoo!
Posted by strattonbrazil at 6:41 PM 1 comment: