In the previous project, a single sphere-shaped light emitter was placed onto the sensor grid. In the example, the light source has been moved back and a pinhole has been added between the sensor grid and all other objects in the scene. This pinhole only allows vectors of photons pass through it if it they travel inside the pinhole to reach the grid. Other photons are thrown out. This pinhole-camera scheme provides a much better detailed picture than the previous implementation as it simulates a perspective frustrum just like the eye or a real camera. A red diffuse sphere bounces light from the light source to the pinhole also.

Included in this project was an importance sampling implementation. This fired photons at the diffuse sphere and directly at the pinhole. The amount of photons fired to each object was a ratio of their solid angle and the total number of photons previously fired in all directions. Because only photons sent to the pinhole and the object were fired, the scene was rendered using much fewer photons. Although more overhead was required to calculate the importance sampling, it greatly reduced the calculation time for every photon collision (having much fewer photons in the scene).

Both of these projects were added to the previous code base at the same time. Importance sampling was required to provide an more interactive debugging of the pinhole code. Final images look better than the previous project, and took much less time to synthesize. 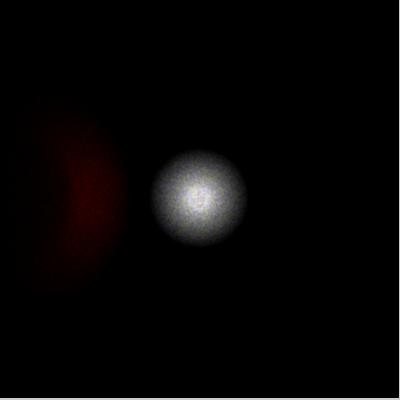 Posted by strattonbrazil at 6:15 AM No comments: